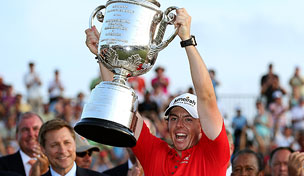 Late Sunday night, after he set the golf world ablaze – once again – with a record-breaking performance in a major championship, Rory McIlroy celebrated his victory at the PGA the way all 23-year-olds would:

“That was my party on Sunday night,” he joked Wednesday during an interview on Golf Channel’s “Morning Drive.”

Hard to blame him.

The PGA was an overwhelming and emotional victory for McIlroy, who set the PGA record for largest margin of victory (eight strokes), became the sixth-youngest player to win two major titles and regained his position as the No. 1 player in the world ranking.

When McIlroy approached his father, Gerry, on the side of the 18th green, he buried his face in his dad’s chest. Rory muttered something like, “Oh my God, can you believe this?”

“And all he said to me,” McIlroy said, laughing, “was stop crying.”

The Northern Irishman said he’d grown frustrated by all of the criticism over the past months, and that his victory at Kiawah Island was a “relief.” Much of that frustration stemmed from the perceived backlash from his budding romance with tennis star Caroline Wozniacki, and the debate whether McIlroy was fully committed to the game. Their relationship had coincided with sluggish summer play from McIlroy, who at one point missed three cuts in a four-start stretch on the PGA Tour, including the U.S. Open.

The PGA triumph helped silence those critics, though.

Said McIlroy, “I saw my dad, and he knew how frustrated I’d gotten over the past few months. He knew how much this meant to me.”