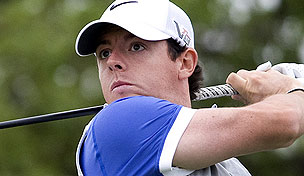 After beginning the final round of the OneAsia Tour’s Korea Open seemingly out of contention, Rory McIlroy stormed up the leaderboard Sunday with a 4-under 67 to nearly secure his first victory of the season.

Alas, his title chances were dashed because of yet another sub-par day on the greens, and McIlroy finished in a share of second, one shot behind surprise winner Sung-hoon Kang. It was McIlroy’s best worldwide finish since he was solo second at the Valero Texas Open in April, and only his second top 10 in his last 11 worldwide starts.

“I could have shot anything, absolutely anything,” he told reporters afterward. “I only missed two greens and had so many chances, but it was like the story of (Saturday) – I just didn’t hole enough putts. I created so many more chances (Sunday) that it could have been 61, 62. It just wasn’t to be.”

McIlroy is No. 63 in the Race to Dubai standings with two events to go. The top 60 players qualify for the season-ending DP World Tour Championship, which he won a year ago.

McIlroy had seemingly shot himself out of the tournament in Korea after a one-birdie 75 on Saturday, and he entered the final day 10 shots behind.

The world No. 6 now heads to China for the BMW Masters, an exhibition with Tiger Woods, and the WGC-HSBC Champions.