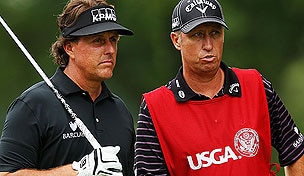 ARDMORE, Pa. – Phil Mickelson had completed his first eight holes of the U.S. Open when he made the turn – groups are starting on No. 11 this week – and ran into USGA executive director Mike Davis during a backup on the first tee.

So the affable lefthander walked over to Davis, who was eating lunch, and decided to offer his thoughts on the setup at Merion Golf Club.

“I told him that this is the best setup I've ever seen for a U.S. Open,” said Mickelson, who wound up posting a 3-under 67. “I think that what I love about Merion and what they did to Merion in the setup is they made the hard holes even harder. They moved the tees back on the more difficult holes, which made it even tougher pars. And I love that because if you're playing well, you're going to be able to make pars and you're going to be able to separate yourself from the field by making pars.

“I think it's the best U.S. Open setup I've ever seen and that's what I was telling him.”