Mickelson confirms he will play WMPO 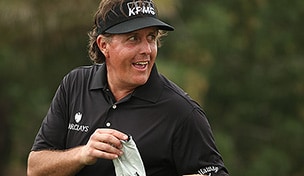 Getty Images
Ryann O'Toole poses for a portrait ahead of the LPGA Founders Cup at Wildfire Golf Club on March 17, 2015 in Phoenix, Arizona. (Photo by Christian Petersen/Getty Images)  -

SCOTTSDALE, Ariz. - After several days of uncertainty and speculation, Phil Mickelson confirmed Wednesday afternoon that he will play the Waste Management Phoenix Open this year.

Mickelson withdrew from the Farmers Insurance Open last week, citing back issues, then sought help from back specialist Tom Boers in Dalton, Ga. He was diagnosed with and treated for locked facet joints in his lower back.

On Monday, Mickelson had withdrawn from the Wednesday pro-am. On Wednesday afternoon, Mickelson arrived in Scottsdale and went straight to Whisper Rock - the private club of which Mickelson is a member.

"I had a good practice session," Mickelson said afterward, "though I didn't go full speed for much of it. I feel fine. I expect to play and play well."

Mickelson is looking to defend his title at an event he's won three times. It was at last year's WMPO that Mickelson lipped out a putt for 59 on the final hole of his first round.

Lefty also said he expects to play next week in the AT&T Pebble Beach National Pro-Am.