Mickelson in contention at Phoenix Open 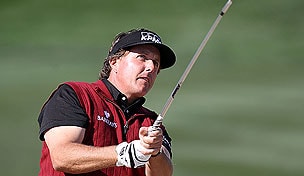 Webb Simpson shot an opening-round 65 and sits one back from leader Ryan Palmer after the first round of the Waste Management Phoenix Open was shortened due to darkness.

Eight players are tied for third at 5 under, including Kevin Na, Jeff Overton, Bubba Watson and Jarrod Lyle, who replaced Nick Watney in the field when he withdrew.

Phil Mickelson recovered from a tough week in San Diego to shoot 68 at TPC Scottsdale.

The first round was delayed an hour Thursday morning because of a frost delay.