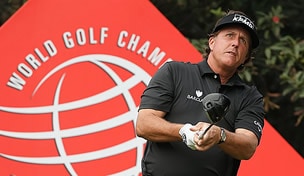 Getty Images
Hideki Matsuyama of Japan aims for a putt on the seventh hole during round one of the Frys.com Open at the CordeValle Golf Club on October 10, 2013 in San Martin, California. (Photo by Robert Laberge/Getty Images)  -

Oh, Phil Mickelson. Will it ever be easy?

Mickelson was 6 under par, one shot off the lead, through 16 holes in Round 1 of the WGC-HSBC Champions in Shanghai, China. He finished six back after a 1-under 71.

After starting on the 10th, and collecting six birdies to no bogeys, Mickelson hit his third shot – with a wedge – into the water guarding the green at the par-5 eighth. After a drop, he hit his fifth shot – another wedge – onto the green, but it spun back, past the flag and into the water. He made a quadruple bogey-nine.

Mickelson then hit his approach shot into the water on the par-4 ninth en route to a finishing bogey, and losing five shots in two holes.

Rory McIlroy leads the way after a 7-under 65.