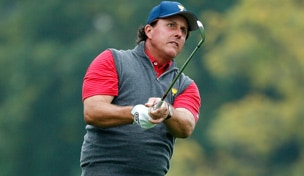 DUBLIN, Ohio – Phil Mickelson is working with a new instructor.

No, Butch Harmon isn’t on his way out. The new instructor is for his pingpong game.

“There were some reports that I took some lessons for pong prior to this tournament,” Mickelson said with a wry smile. “And those reports would be correct.”

Other than hitting around with teammate Jason Dufner a little bit, though, he has yet to put the recent lessons to the test in the United States team room.

“I haven't really been playing any matches, been taking it easy. Again, working on the fundamentals, but it seems like it's coming around. I'm ready for the challenge with some of the players.”

And yes, he had a smile on his face when he said that.