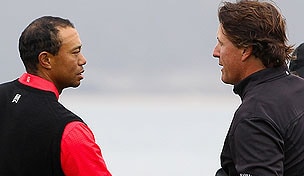 Phil Mickelson once again proved on Sunday that he has Tiger Woods’ number. No, not 14 – as in majors – or 71 – as in PGA Tour wins – but Lefty is batting .667 since 2007 against Woods when paired together.

In their last dozen pairings, Mickelson has beaten Woods head-to-head on eight of those days and tied him once. Mickelson has taken the game in the last five final-round match-ups.

Mickelson daftly explained his recent run against Woods saying, “I just feel very inspired playing with him. He brings out some of my very best golf.”

The 41-year-old meant Woods, but he also could have meant Woods’ former coach, Butch Harmon, who revealed to Mickelson the mind games his ex-pupil plays to stifle his competition. Harmon shared some of the tactics publicly in 2010, including how Woods times putting out and arriving to the tee, as well as how Woods paces himself in contrast to his playing partner.

Mickelson didn’t acknowledge the playbook, but said simply at the time, 'There are a number of reasons I just don't want to go into, but there has been a change.'

On Sunday, Mickelson didn’t need a Jedi mind trick to get in Tiger’s head. His play out of the gate was enough.

Mickelson displayed a balance between touch and aggression, which are critical to success on Pebble’s Poa annua greens – the same surfaces whose bumps drove Woods away from the Clambake in 2002. What a contrast from a season ago, when Mickelson was a potential liability from outside of 3 feet.

It’s unclear what sparked Mickelson’s resurgence with the flat stick, but perhaps his brief stint with the belly putter last fall may have done some good. At a minimum, it didn’t seem to hurt.

Woods made headlines this week by suggesting his solution to abolish the belly putter. Given his Mickelson-esque performance with short putts on Sunday, he may want to consider spending a little time with one.

If he doesn’t want to ask Mickelson about it, maybe Woods could consult pro-am partner Tony Romo.