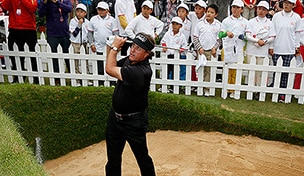 After reiterating last week that he plans to scale back the amount of tournaments he will play in 2014, reigning British Open champion Phil Mickelson shared some details about exactly how his schedule will shape up next summer.

Teeing it up this week at the WGC-HSBC Champions after his tie for 19th at the CIMB Classic, Mickelson told reporters that he plans to return to the Fedex St. Jude Classic next June as an immediate tune-up before the U.S. Open at Pinehurst No. 2.

'I enjoyed and felt like playing Memphis the week before was very helpful for me to be ready,' explained Mickelson, who tied for second at the U.S. Open this past summer a week after achieving the same result in Memphis. 'They are very similar grasses at Memphis as we have at Pinehurst, with the exception of the greens being bent at Pinehurst ... so I plan to play Memphis.'

The 43-year-old also indicated plans to play The Memorial Tournament, an event he skipped this year after withdrawing during the first round in 2012. Should those plans remain in place, it ensures that Mickelson will remain busy leading up to the season's second major as he eyes the elusive fourth leg of the career Grand Slam.

'I like having a three-week stretch heading into the majors, although this year that will be the only three-week stretch,' he said of the Muirfield Village/TPC Southwind/Pinehurst trio. 'I will play (Houston) and the Masters, Scottish (Open) and the British (Open), Akron (WGC-Bridgestone Invitational) and the PGA (Championship), and I'll probably have a one-week lead up. But I plan on having two weeks prior to the U.S. Open lead up, and I'll have some time in Pinehurst prior to that.'

While the heart of Mickelson's 2014 schedule is beginning to take shape, the five-time major champion still hinted at taking more time off next year after making 22 and 21 PGA Tour starts across the last two seasons.

'I think it will be proper spacing. It really took a lot out of me these last couple of months where we played nine out of 12 weeks and it was difficult for me to get the proper practice session and preparation for each tournament,' he added. 'I don't want to enter a tournament where I feel unprepared, and that's kind of the baseline that I'm going to use to build my schedule next year.'