A Lefty allegiance: Will start season at Humana 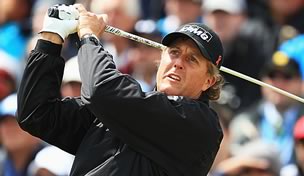 Phil Mickelson will begin his PGA Tour season at the Humana Challenge, the tournament announced Friday. The two-time winner of the event hasn't played the tournament formerly known as the Bob Hope Classic since 2007, when he tied for 45th place.

The Mickelson news came on the same day Greg Norman said he would play too. Both said they're pleased to play because former President Bill Clinton and his foundation are supporting the event.

'I'm honored to join President Clinton and the Clinton Foundation for the Humana Challenge,' Mickelson said. 'Some of my best seasons have come after starting at this event and I'm really excited about coming back again.'

Mickelson won the Bob Hope Classic in 2002 and 2004, both in playoffs, and he's one of seven players to have won this event multiple times. The Humana Challenge is Jan. 19-22 and will be played at LaQuinta Country Club as well as the Palmer and Nicklaus courses at PGA West.