Mickelson to trim schedule to focus on career slam 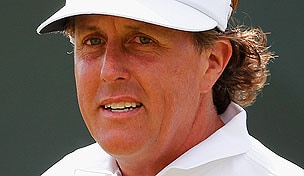 Three months removed from his triumph at the British Open, Phil Mickelson has not been shy about his renewed focus on capturing the title that has most eluded him: the U.S. Open, where he has finished runner-up a record six times.

Speaking Wednesday in advance of the CIMB Classic, the southpaw indicated that his stated plans to trim his 2014 schedule are designed to help his game peak at the majors, specifically at Pinehurst No. 2 next June.

'There is no hiding the fact that winning the U.S. Open would be my career goal and completing the career Grand Slam,' explained Mickelson, who make his 2013-14 season debut Thursday in Kuala Lumpur. 'That is the final leg that I have and I'll be putting most of my focus into winning the U.S. Open.'

As a result, Mickelson again took the opportunity to reiterate plans to play fewer events next year. The 43-year-old made 21 starts during the 2013 season in addition to his appearance at the Presidents Cup earlier this month, but claims that his number of starts will begin to decrease shortly.

'I just don't know how it is going to play out right now,' he told reporters in Malaysia. 'I know that I am going to start cutting a certain percentage of events next year and I'm not sure which ones those will be.'

A former standout at Arizona State and a current California resident, Mickelson has annually been a mainstay during the PGA Tour's West Coast events in the early part of the year. Last season, the five-time major winner made his debut at the Humana Challenge in January, then played in four more events before the calendar hit March, including the Waste Management Phoenix Open where he won by four shots.

In his comments this week, though, Mickelson indicated that more of an emphasis may be placed on tournaments closer in date to the season's four biggest events.

'My whole purpose and focus will be ... participating in certain tournaments that will help me play well in those majors,' he added. 'So a tournament that is taking place two months prior or after a major championship that has no impact on my ability to perform well in a major, those are tournaments that I won't put as much importance on.'