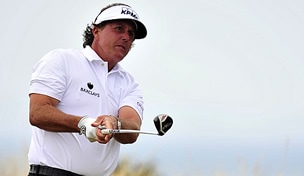 The PGA Tour heads to Malaysia this week for the CIMB Classic, where $1.26 million goes to the winner of the limited-field event. Here are four groups to watch at Kuala Lumpur Golf & Country Club (click here for full tee times). Golf Channel will air the event live from 11PM-3AM ET, beginning Wednesday night.

Bradley and Watson are making their first trips to Malaysia, while Siddikur, a seven-time winner internationally, has played in this event each of the past three years. Bradley had seven top-10s, including a pair of runners-up, in 25 starts in 2013, and he’s coming off a solid Presidents Cup, where he tallied a 2-2-1 record. Watson, meanwhile, hasn’t played in more than a month, since he tied for 24th at the BMW Championship and was eliminated from the FedEx Cup Playoffs.

Mickelson returns to the Tour after a 2-2-1 performance at the Presidents Cup. It’s his first start at the CIMB. Watney, meanwhile, shot a final-round 61 to win last year’s event, though it was played on a different course (the Mines). Aphibarnrat has top-25s in two starts in Malaysia.

Fowler will be making his first start since the BMW in mid-September, but he tied for fifth at this event in 2010. Garcia has never played this tournament but was in good form when last we saw him, in the FedEx Cup playoffs, when he ended his 2013 campaign with top-10s in two of his last three starts. Bhullar was T-10 here a year ago.