Monday finish could have consequences at Presidents Cup 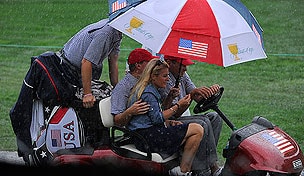 Getty Images
BELFAST, NORTHERN IRELAND - JUNE 22: US Open winning golfer Rory McIlroy is showered with champagne by club members as he stands with his trophy at Holywood Golf Club on June 22, 2011 in Belfast, Northern Ireland. The 22 year old golfer has returned home to his native Northern Ireland and is giving press interviews and meeting with local supporters. (Photo by Peter Macdiarmid/Getty Images)  -

DUBLIN, Ohio – Ten years ago, the Presidents Cup ended in a tie. Believe it or not, there’s potential for an even stranger conclusion this week.

That’s because of a provision in the tournament guide, which states that a final total would be determined based only on matches completed by sundown Monday evening.

With a 70 percent chance of thunderstorms throughout Sunday afternoon, there is already fear that the 12 singles matches could be delayed an extra day. In the event that happens, any singles match completed by sundown would count toward the overall point total, while any matches still on the course would be considered and void.

“There is no provisions in there to reduce the number of matches,” said tournament director Steve Carman. “Although if we don't have 34 matches in by the end of the day on Monday, it's reduced.”

The matches, he explained, would conclude Monday and cannot extend to Tuesday, even if not completed.

With that in mind, Carman explained that there would be a consideration to moving up Sunday’s matches if that meant avoiding the impending thunderstorms.

“We have about five hours on Sunday morning that we can make up time, as well, because I think the approximate starting time for the singles is like 12:05.”