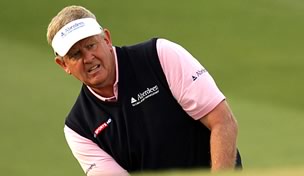 Only days removed from his 50th birthday, Colin Montgomerie will make his Champions Tour debut this week at the Constellation Senior Players Championship with an eye on several firsts.

Though inducted into the World Golf Hall of Fame earlier this year, the Scot is still without a major title, senior or otherwise, to his credit. Additionally, despite several close calls, Montgomerie has never before hoisted a trophy on U.S. soil. He has the chance to achieve both feats this week when he tees it up at Fox Chapel Golf Club outside Pittsburgh.

'I had a great career, a great normal career if you like,' Montgomerie told PGATour.com this week, having celebrated his 50th birthday on June 23. 'But of course there's always an omission – isn't there? – when you talk about me. There's a lack of a major championship.'

Though he has scaled back his competitive schedule in recent years, Montgomerie reportedly plans to embrace a full schedule on the Champions Tour, playing upwards of 20 events each year.

'My game is in good order,' noted Montgomerie, who has made two cuts in seven starts this year on the European Tour. 'I'm just looking forward to having an opportunity of competing on more of a level playing field.'

A winner 31 times in Europe, Montgomerie was a runner-up at a major five times across his career, including three times at the U.S. Open (1994, 1997, 2006). He embraces the opportunity the over-50 circuit offers, eager to add the credential that has most eluded him despite winning the European Tour Order of Merit a record eight times.

'I think it would fulfill a dream, of course it would,' he said of winning a major. 'It would be fantastic to try and achieve the dream of winning a major championship finally, whether it be normal tour or senior tour, I do look forward to it.'