Monty: Time is ticking on Westwood 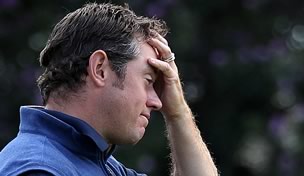 Lee Westwood is 38 years old now and still 0-fer in majors. He’s had chances – particularly since the ’08 Masters came and went – but has yet to hoist one of the game’s four biggest trophies.

On paper, Westwood had his chance at the start of the U.S. Open. Coming off a frustrating putting performance at the Masters, Westwood had an intriguing pairing with Luke Donald and Martin Kaymer – the two players sandwiching him in the Official World Golf Ranking. They had a favorable draw in the morning-afternoon group that afforded better scoring.

And then the first round happened. Westwood shot 4-over 75, finishing the day some 10 shots back of Rory McIlroy. At that point, it was over for the Englishman.

Westwood rallied to tie for third place, kind of like he did when Louis Oosthuizen blew away the field at St. Andrews last July. He never could chip away from that 10-shot deficit, though, and he finished that far back from McIlroy.

The time is ticking on Westwood to win a major. At 38, he is on the older side of the top players in the game. As the last four major champions are 28 or younger, he is at least a decade removed from the trending age of major winners. He’s a half-dozen years older than what is considered the major prime. Unless Westwood is to become the English Mark O’Meara and win two majors in a year at the age of 41, the window has closed.

A man who has had a similar run is Colin Montgomerie. Monty had so many close calls, but never could cash in on a major win. He suspects Westwood has two years left to win – until he turns 40.

“Lee is 10 years younger than me and is approaching that horrible age of 40 where you don’t tend to improve once you reach it,” Montgomerie said this week. “The next eight majors for Lee are very important. So the pressure is really on and he knows that as well as anyone.”

Montgomerie had the 2006 U.S. Open on his hands at the 72nd hole of Winged Foot at the age of 43, so maybe Westwood had more shelf life. However long Westwood has, it can’t be longer than five years. That’s 20 majors. He lost this one, so he has 19 to go.

Westwood seemed encouraged by his game at Congressional, at least for three rounds. Maybe he won’t need the seven lives afforded him by Monty.

Says the world No. 2, “I’ll be looking forward to the Open Championship now. Finally got my game in good shape.”