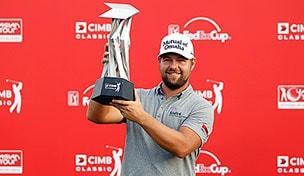 But Ryan Moore had 1.26 million reasons to believe the delayed finish at the CIMB Classic was well worth the wait.

Moore made a 4-foot birdie putt on the first hole of a sudden-death playoff to defeat Gary Woodland and capture his third career PGA Tour title.

“I’ve been putting in the effort and the time,” Moore said afterward, “and it’s nice to see it pan out a little bit.”

Darkness forced a Monday finish – or a 7:30 p.m. ET Sunday restart for those in the U.S. – after the final round was twice delayed by inclement weather.

Playing the 634-yard, par-5 18th at Kuala Lumpur Country Club in Malaysia, Moore laid up to 157 yards and spun his low iron to 4 feet.

From the right rough, and with a difficult angle, Woodland was unable to find the green with his third shot and then couldn’t sink his birdie chip.

“I thought I hit a pretty good third shot,” said Woodland, who was vying for his second win in 12 weeks (Reno-Tahoe Open), “but it just came up a little bit short.”

Woodland had a chance to win in regulation, but his 12-foot birdie putt on the last green slid by the cup. Moore made a 4-foot par putt to force the playoff. Both players finished at 14-under 274.