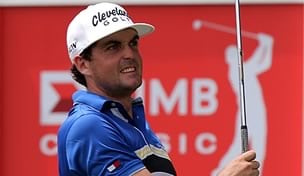 Getty Images
Annika Sorenstam talks with the media about her 33rd birthday and her pending induction in the Golf Hall of Fame Thursday, October 9, 2003 at the Samsung World Championship in Houston, Texas. Rain cancelled play early in the first round. (Photo by A. Messerschmidt/Getty Images) *** Local Caption ***  -

Ryan Moore leads after the first round of the CIMB Classic in Kuala Lumpur, Malaysia. Moore shot 9-under 63 to take a two-stroke advantage over Keegan Bradley. Sergio Garcia is three back with a host of others four in arrears.

What it means:  It means that for the first time since the wraparound schedule began, we have a top-flight leaderboard. Kind of. There’s still a chance for a surprise winner, but there’s also a chance for a proven champion and a tight contest. That makes this week’s event (aside from the time difference) compelling.

Round of the day: Bradley’s 65. On a day in which his beloved Boston Red Sox whipped the St. Louis Cardinals by seven runs, 8-1, in Game 1 of the World Series, Bradley shot 7 under to contend in Malaysia. Pretty solid day.

Best of the rest: Moore’s 63. Yes, it was two strokes lower than Bradley’s, but Keegan gets extra Red Sox credit. Moore, meanwhile, had 10 birdies and one bogey. Not a bad day, himself.

Biggest disappointment:  Bubba Watson. The former Masters champ shot his worst round of the year – his worst round since the 2012 U.S. Open – a 6-over 78. Watson has had only one top-10 finish since February. Fortunately for Watson, the season is almost over. Well, the year is, anyway.

Main storyline heading into Day 2: What will Phil do? Will he contend? Mickelson is at 1 under through the first round, putting him in a tie for 21st place. He was miserable after his opening round, which included five birdies and two double bogeys. Not even he knows what to expect, which makes it all the more fun to watch.

Quote of the day: “I can’t remember a swing this bad in a long time. As I shoot video of my swing, I’m doing everything wrong. The path of the club is too inside and then it’s vertical. The head’s moving, my legs are loose. Divots are steep. It’s terrible. It’s the worst I’ve hit it. I can’t find the middle of the club face.” – Phil Mickelson