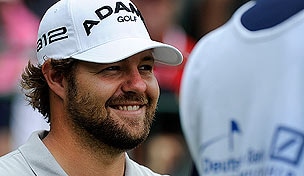 It may not go in the PGA Tour record books, but Ryan Moore shot 59 at the Humana Challenge.

Moore played the final 15 holes of the second round on Friday in 13-under par. With a pair of bogeys in the first three holes, Moore carded 61 on the Nicklaus Private course to charge into contention at the former Hope.

In his first three holes at the Palmer Private course on Saturday, Moore made another birdie to close an 18-hole stretch of just 59 strokes.

Coincidentally, this is Moore's first week representing the Arnold Plamer line of clothing from Quagmire Golf. It's also his first tournament with veteran looper Tony Navarro on the bag.

“We're having a great week, he's a great guy with a ton of experience, obviously, and I thought that would, could really help me take that next jump in my career and start winning a little bit more, so I'm excited to have him on the bag and excited for this year,” Moore said.

The PGA Tour does not maintain records for 18 consecutive holes, only scoring for a single round. Nick Watney, however, did shoot 12-under

58 in an 18-hole span between the third and fourth rounds of the 2010 Tour Championship.

Of course, the Humana Challenge was site to one of the five true rounds of 59 shot on the PGA Tour. In 1999, David Duval capped off the 90-hole event with 59 to take the title over Steve Pate by a shot.