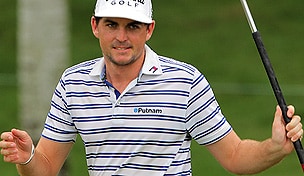 What at one point appeared to be a runaway for Keegan Bradley in Malaysia has turned into a tight race following Bradley's third-round struggles. Here's how things shape up heading into the final round of the CIMB Classic, where Ryan Moore and Chris Stroud share the lead over a host of contenders:

What it means: Bradley's backpedaling Saturday at Kuala Lumpur Golf and Country Club opened the event back up to the field, and Moore and Stroud took full advantage. Having led after the first round, Moore regained sole possession of the lead after birdies on six of his first 10 holes Saturday, but four bogeys across a five-hole stretch from Nos. 12-16 dropped him back to 12-under 204. There he was joined by Stroud, who will begin Sunday's round in the final pairing as he looks to win his first career PGA Tour title.

Round of the day: At this point, there's a good chance Bubba Watson would like a mulligan for his opening-round 78. The southpaw rebounded with a 3-under 69 in the second round, then torched Kuala Lumpur for a 7-under 65 on Saturday. The former Masters champ had an eagle on the par-5 fifth hole in addition to seven birdies, including five on the back nine, to card the day's low round. At 7-under 212, Watson sits five shots off the pace with only an outside shot at the title, thanks largely to his struggles on Thursday.

Best of the rest: Just shy of his 47th birthday, Kelly now finds himself in the thick of contention on the PGA Tour thanks to a 6-under 66 Saturday in Malaysia. The Wisconsin native carded seven birdies during his third round against just a single blemish, moving up 13 spots on the leaderboard in the process. He'll now begin the final round alone in fifth place at 10 under, just two shots behind Moore and Stroud, as he looks to secure his first PGA Tour title since the 2009 Zurich Classic of New Orleans.

Biggest disappointment: Beginning the day with a four-shot lead, everything went wrong for Bradley, who carded a 4-over 76 that was better than only five players Saturday among the 78-man field in Malaysia. The former PGA champion was 1 under through 11 holes but stumbled coming home, carding three bogeys and a double bogey across his final seven holes to surrender the lead. Now three shots off the pace, he'll hope to rebound Sunday as he looks for his first win since the 2012 WGC-Bridgestone Invitational.

Main storyline heading into Sunday: Hard to choose just one from such a crowded leaderboard, as eight players will begin the final round within three shots of the lead. That group includes Stroud, who lost a playoff to Ken Duke at the Travelers Championship this summer, DeLaet, who is quickly ascending the list of 'best players without a PGA Tour title,' and Stewart Cink, who looks to get his hands on a PGA Tour trophy for the first time since lifting the claret jug five years ago.