Most clutch performances in 2011 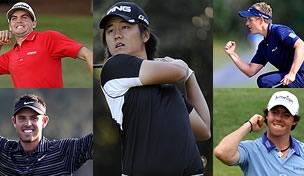 With due respect to all others, the European Solheim Cup team immediately comes to mind, the Ulsterman played in his own division in 2011. A U.S. Open victory is good stuff, but McIlroy distanced himself from the rest of the pack based on the degree of difficulty of his singular achievement.

Four starts removed from what could be for others a career-crushing loss at the Masters, McIlroy rebounded with rounds of 65-66-68-69 to lap the field by eight strokes at Congressional.

“Graeme McDowell said there wasn't even going to be an under-par round this week or anybody finishing under par. Rory, I don't even know what he is,” Robert Garrigus said.

McIlroy’s closing 80 at Augusta National, an adventurous round that exposed weaknesses in his game that never surfaced at Congressional, only serves to point out how clutch the 22-year-old was at the U.S. Open.

From the ashes of Augusta National McIlroy singlehandedly rewrote the U.S. Open record book, shattering the 72-hole scoring record by four strokes, the relation-to-par scoring record and becoming the youngest to win the Open since Bobby Jones in 1923.

Clutch by any definition.

Charl Schwartzel delivered far more than the most clutch performance in golf this year.

He delivered one of the best finishes under pressure we’ve ever seen.

Making birdie at the 72nd hole to win a major championship is impressive, but birdies at the 69th, 70th, 71st and 72nd holes to win the Masters gives deeper meaning to the definition of clutch.

Schwartzel trumped anything Jack Nicklaus, Bobby Jones, Ben Hogan or Tiger Woods ever did to close out a major. He did what none of them ever did in winning with four closing birdies.

Luke Donald's Sunday rally to win at Disney and clinch the PGA Tour money title was gritty. Yes, Bill Haas was impressive late this summer with his escape from the water to win the FedEx Cup. Keegan Bradley was terrific under pressure coming from five shots down with three holes to play to win the PGA Championship in his first appearance in a major. Steve Stricker’s closing birdie to win the John Deere Classic made you shake your head in wonder. The European Solheim Cup team’s late turnaround to win will go down as one of the best finishes to an international team event, but nobody topped what Schwartzel did to earn a green jacket this year.

With the pressure ratcheted up on that Masters’ Sunday, with eight different players holding or sharing the final-round lead, with five players holding the lead at the same time, Schwartzel separated himself in historic fashion.

The former All-America selection from the University of Washington was well off the number to qualify for a 2012 card following a 6-over 78 in the fourth round. He bounced back with a 65 the next day, but still found himself off the pace. In fact, with only five holes left to play in the final round, he was four strokes off the magic number, his fate apparently sealed with a trip to the Nationwide Tour.

Finishing on the front nine of the PGA West Stadium Course, he closed eagle-birdie-par-birdie-birdie to claim his playing privileges in the big leagues with a shot to spare.

Q-School lore is filled with hard-to-believe stories of success and failure. Lee’s tale ranks up there with the best of ‘em.

There’s no perfect way to compare the clutch performance of Lee against, say, Masters champion Charl Schwartzel and his four closing birdies, but think about it this way: If Schwartzel lost, he still had a job. We can’t say the same for Lee.