What's intriguing about the rest of the 2012 golf season? 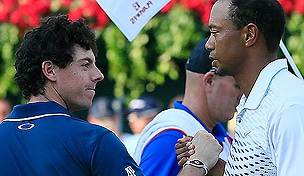 The majors have come and gone, the playoffs are finished and the Ryder Cup has wrapped up, but the golf season is far from over. The GolfChannel.com team weighs in with what they are most looking forward to over the final three months of 2012.

The world’s most colorful tour isn’t done entertaining us just yet.

The world’s best players aren’t done competing against each other for a meaningful title in 2012.

The European Tour’s DP World Tour Championship in Dubai is the most important competition left this year.

The Race to Dubai’s season finale Nov. 22-25 will bring all those European Ryder Cup stars back together in a bid to win the European Tour’s most coveted prize.

Eight of the top 10 players in this week’s Race to Dubai standings were members of the European Ryder Cup team that stunned the Americans by equaling the greatest comeback in Ryder Cup history. All 12 Euro Ryder Cuppers will rank among the top 60 who earn invites to the DP World Tour Championship next month.

Rory McIlroy, who should run away with the PGA Tour’s Player of the Year voting, is going after the Harry Vardon Trophy as the European Tour’s Race to Dubai winner. He leads the Race to Dubai standings. Who will step up to challenge him in the next seven weeks? Can Ian Poulter ride his hot Ryder Cup performance and challenge McIlroy in Dubai? Some of the best questions left in golf this year will be asked and answered in the Race to Dubai’s finish.

Whatever the Ryder Cup proved – Europe’s dominance, America’s perceived indifference, the inherent pressures of team golf – the three-day mosh pit did come up short in one critical race between the game’s alpha males.

As riveting as Sunday at Medinah was, it failed to give us the much-anticipated match-up between world No. 1 Rory McIlroy and Tiger Woods. Truth is Lombard (Ill.) deputy police chief Patrick Rollins, who rushed McIlroy to the golf course on Sunday, spent more time with the Ulsterman last week than Woods.

Although the two failed to meet in match play at Medinah, the budding rivalry will be, with apologies to the Fall Series and the last edition of a meaningful Q-School, the most compelling headline in a rapidly waning season.

The two are scheduled to play next week’s Turkish Airlines World Golf Finals, an eight-man exhibition ripe with head-to-head opportunities, and again in an 18-hole match on Oct. 29 in China.

Neither event means much when compared with last week’s Ryder Cup drama, but the growing sentiment that the duo is destined to develop one of the game’s classic rivalries, however friendly, will only be fueled by the silly-season stops. What both events lack in competitive relevance they make up for with the only marquee in golf that matters – Rory vs. Tiger.

Q-School as we know it is dead, or at least it’s on a ventilator. This fall’s qualifying series is the final time that players can directly earn a PGA Tour card; starting in 2013, qualifiers will be directed to the Tour’s secondary circuit, the Web.com Tour.

What I’m most interested in seeing is how college golf’s elite react to this upcoming change and if they take one final crack at earning a Tour card. Patrick Cantlay, a former college player of the year at UCLA, already left school this past summer. Texas sophomore Jordan Spieth is exempt into second stage and could bolt early, too. But what of Washington’s Chris Williams, or Alabama’s Justin Thomas, or Stanford’s Patrick Rodgers?

Golfers rarely have been one-and-done athletes in college. But for this year, and perhaps this year only, the best collegians in the country aren’t unlike their fellow classmates who play football, baseball or basketball – they will be forced to weigh whether to stay in school and earn a degree or leave campus and test the alluring world of pro sports. Players would make this decision during or after the fall semester. With golf’s NCAA Championship being contested in June, their decision could seriously damage their team’s chances of winning a national title.

More, though, their decision could greatly shape the youth movement on Tour.

Yeah, yeah. I know all the familiar sayings about greenbacks, but my interest level in the remainder of the golf calendar starts with straight cash, homey.

One year ago, Luke Donald pulled off a never-before-accomplished feat when he led the final PGA Tour money list, then crossed the pond and the claimed the European Tour money title, too. Considering it had never happened before, it wasn’t out of the realm of possibility to believe it would take awhile to happen again.

With just four Fall Series events remaining, Rory McIlroy has the PGA Tour money title all locked up with $8,047,952. He can now focus his efforts on the Euro circuit, where his €2,813,962 currently gives him a €437,334 lead over Justin Rose in his quest to match Donald’s mark from last year.

With the BMW Masters, Barclays Singapore Open and DP World Tour Championship still on his schedule, the 23-year-old is sitting squarely in the driver’s seat. From the last real Q-School to high-profile exhibition events to the silly season, there’s still plenty of golf left to be played in 2012 and plenty of things left to watch. Give me Rory’s pursuit of history over all of 'em.

After all, money makes the world go 'round.