Muirfield pin locations set up similar to the Memorial 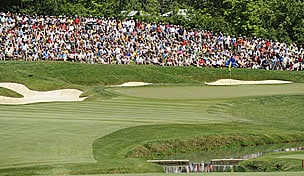 DUBLIN, Ohio – It’s interesting to hear all the talk this week about how differently Muirfield Village is playing for this week’s Presidents Cup compared to when the course hosts the annual PGA Tour stop in June.

Both teams had little trouble scoring on Day 1 at the Presidents Cups. Consider that the day’s first match – a heated bout between Jason Day and Graham DeLaet against Hunter Mahan and Brandt Snedeker – featured at least one birdie on all but four holes.

The low scores seem to be the primary byproduct of lower rough – this week’s rough has been topped off at 2 ¼ inches compared to the 4-inch hay players face at the Memorial.

Other than that, however, it seems as if the Tour isn’t setting the course up any differently than it does in late spring. Friday’s hole locations, for example, are largely the same as they were for Round 2 at the Memorial.

Just don’t expect the same results on this Friday. The Day 2 scoring average this year at the Memorial was 73.667.

Here's a look at the Day 2 Presidents Cup hole locations: And for Round 2 of the Memorial: