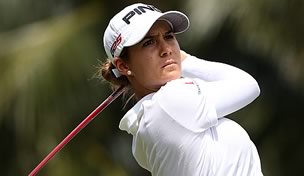 Munoz closed with a 5-under-par 65 to win her second Ladies European Tour title. She finished a shot ahead of Gwladys Nocera (67) and Valentine Derrey (67), two shots ahead of Joanna Klatten (68) and four ahead of Karine Icher (64). They were all trying to win in their native France.

Munoz, 25, helped the Europeans defeat the Americans last month at the Solheim Cup. She won her first LPGA title a year ago, but she hadn’t been happy with her play this year until late this summer. She says the Solheim Cup sparked her game.

“It’s been a long year, and I’ve been playing really bad and since Solheim it’s got much better,” Munoz told reporters after her victory. “I’m just really happy to have won here.”