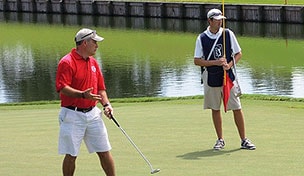 Getty Images
SAN ANTONIO TX - MAY 14: Anthony Kim tees off the par three 5th hole during the first round of the Valero Texas Open held at La Cantera Golf Club on May 14, 2009 in San Antonio, Texas (Photo by Marc Feldman/Getty Images)  -

Canadian real estate developer Paul Nault realized a dream on Thursday. The 49-year-old from Victoria, British Columbia only started playing golf three years ago, but now he can call himself a national champion, thanks to some perseverance and a lot of help from the player who led the Snead flight the first three days.

Nault was seven shots off the pace with five holes to go on the Stadium Course, but bad fortune for third-round leader Scott Fjeldstad combined with a solid finish from Nault turned the tide.

Fjeldstad, a real estate broker from Trabuco Canyon, Calif., made a 9 on the difficult par-4 15th, while Nault scraped together a par. Two holes later, Nault hit a 9-iron to three feet for birdie on the infamous island green 17th, while Fjeldstad hit four balls in the water.

'I had to sink a 30-footer to make nine,' said Fjeldstad. 'I'll never forget it. I'm just beside myself.'