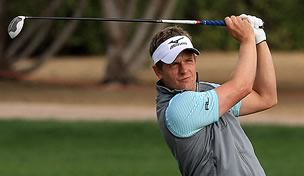 ABU DHABI, United Arab Emirates – It was the “road work” that Luke Donald put in before his historic 2011 campaign that led to four worldwide victories, money titles on both sides of the Atlantic Ocean and a stranglehold on the top spot in the world golf ranking.

So how did the Englishman spend the 2012 off-season? Working, as if there were any other answer.

“Working on very similar stuff,” Donald said on Wednesday at Abu Dhabi Golf Club. “I am really trying to get my swing a little bit more solid, especially with the longer clubs and create a bit more consistency with that.”

It is interesting that his search for “consistency” drove Donald to some new extremes. When he tees off on Thursday with Tiger Woods and Rory McIlroy, 12 of Donald’s 14 clubs will be new, including a complete set of Mizuno irons and two wedges and a TaylorMade 3-wood and driver.

“The off-season is the easiest time to do it,” he said. “I did some good testing the last 10 days and really felt like they were very solid.”

Donald didn’t do a complete makeover, however. His Bettinardi putter and Mizuno hybrid remained unchanged.