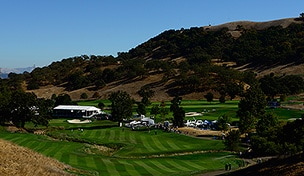 Getty Images
KIAWAH ISLAND, SC - AUGUST 08: Francesco Molinari of Italy kicks his coach Denis Pugh during a practice round of the 94th PGA Championship at the Ocean Course on August 8, 2012 in Kiawah Island, South Carolina. (Photo by Andrew Redington/Getty Images)  -

SAN MARTIN, Calif. – The 2013-14 PGA Tour season got off without a hitch Thursday morning at CordeValle Golf Club.

A beautiful blue sky, shrouded by a light, foggy haze, greeted players in Round 1. Bryce Molder, Kevin Chappell and Brian Stuard went off the first tee at 7:10 a.m. PT. Nicholas Thompson, Luke Guthrie and Scott Langley began on the 10th.

Twenty-one of 40 PGA Tour events were suspended because of inclement weather last season. That doesn’t include the Presidents Cup, which was a meteorological mess.  But this is a new season, if still the same calendar year, and there is a zero-percent chance of rain, according to the Weather Channel, for each of the four tournament days.

Players will have to battle cold weather each morning – it was 49 degrees when the first balls were struck Thursday – but temperatures are expected to extend into the mid-70s.