New twist for 'The Haney Project' this season 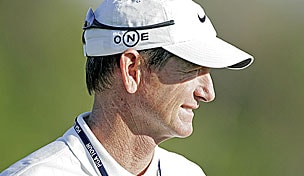 Getty Images
SAN FRANCISCO - OCTOBER 07: Tiger Woods of the USA Team walks to a green during a practice round prior to the start of The Presidents Cup at Harding Park Golf Course on October 7, 2009 in San Francisco, California. (Photo by Scott Halleran/Getty Images)  -

ORLANDO, Fla. – Golf Channel’s series 'The Haney Project' returns Feb. 27 at 9 p.m. ET for a one-hour premiere episode of the fourth season with a new twist: not just one, but four celebrity projects will expose their golf games to a national television audience for the chance at improving under the guidance of Hank Haney.

The series moves to a new night, shifting to the 9 p.m. ET Monday time slot where it will precede a new season of 'Feherty' (10 p.m. ET). This year’s eight-part series will follow a lineup of four celebrities from all different walks of life that will rely on Haney’s tutelage to lower their scores.

'The Haney Project' will star Grammy Award-winning Maroon 5 front man Adam Levine, legendary boxer Sugar Ray Leonard, acclaimed chef Mario Batali and former supermodel Angie Everhart. The season will follow the celebrities through the trials and tribulations of becoming the next great celebrity golfer, leading up to an ultimate showdown in Cabo San Lucas, Mexico where the famous foursome will compete against each other for the chance to win $100,000 for the charity of their choice.

“This year we get to do something completely different with some amazing names,” Haney said. “These four celebrities are at the top of their respected fields. They know the hard work and dedication needed to be the best, whether it’s acting, music, sports or cooking. They all have the drive and determination to win. This will be the biggest project yet.”

The first season of 'The Haney Project' with Charles Barkley marked the highest-rated launch of an original series at that time. Subsequent seasons featured actor Ray Romano and conservative commentator Rush Limbaugh.

A U.S. District Court denied a motion by the PGA Tour to dismiss a lawsuit filed by Hank Haney last year against the circuit.