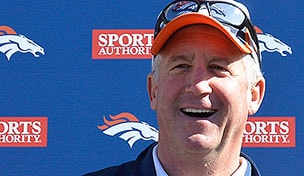 Getty Images
Padraig Harrington of Ireland in action during the final round of the PGA Grand Slam of Golf at Port Royal Golf Course on October 16, 2013 in Southampton, Bermuda. (Photo by Ross Kinnaird/Getty Images)  -

The Denver Broncos are off this week, so head coach John Fox went to his offseason home in Charlotte for some R&R, which included playing a round of golf on Saturday. Unfortunately, his round was cut short after he felt dizzy, according to ESPN.

Initial reports said Fox experienced symptoms similar to a heart attack, but those were later proved false. However, it was eventually determined that the 58-year-old will undergo aortic valve replacement surgery early this week at a hospital in the Charlotte area,

'I sincerely appreciate all of the support from friends, Denver Broncos fans and so many around the league today,' Fox said in a statement released by the team Saturday night. 'Although I am disappointed I must take some time away from the team to attend to this pre-existing health condition, I understand that it's the right thing to do. I have great confidence in our coaches and players, who are fully committed to our goals.

'I look forward to returning to coaching as soon as possible.'