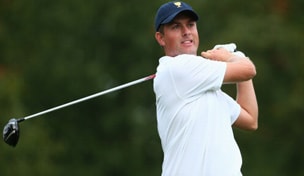 Getty Images
Hitting up the popular Katz's Deli, Win McMurry has to wait in line like everyone else while in NYC for Gone With The Win.  -

DUBLIN, Ohio – If they handed out a sportsmanship award at the Presidents Cup, Webb Simpson might have locked it up Sunday afternoon.

With the overall victory already claimed by the United States, the penultimate match of the day came to the final hole with no bearing on the actual result. So Simpson, who had led Louis Oosthuizen ever since the second hole, saw an opportunity to keep things friendly.

Had the overall match not been closed out by Tiger Woods minutes earlier, their match could have been the deciding one. And if the final result was still hanging in the balance, Simpson and Oosthuizen would have gone to extra holes rather than each taking a half-point.