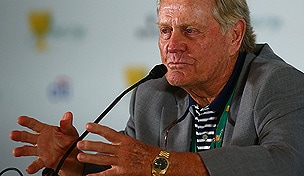 DUBLIN, Ohio – The Presidents Cup may never have the stature of the Ryder Cup, but at least one influential voice believes the former is 1-up on the latter in a few important areas.

“I'd love to see the Ryder Cup change its structure,” Jack Nicklaus said with a laugh.

While both are biennial competitions, they differ in that the Presidents Cup is contested over four days instead of three; all 12 team members must play each of the first two sessions; and rather than a blind draw, captains may pit their players against specific opponents.

“Guys came here to make a team. They worked their tails off and they want to play, so I think that's good. … I suppose on paper this year, you look at the U.S. team, it's pretty strong. I've gone to where the U.S. team has been pretty strong and we've gotten whipped, too, in the Ryder Cup and the other. I've been on both sides of the fence. I just happen to like this format better because of those reasons.

“The other one is, the way the pairs are, in the Ryder Cup, you just put it in an envelope. Here, you match pairings. I really like that. And it actually lets the captain do something strategic. And not hiding the guys – a few more matches over four days.