No lingering neck pain for Oosthuizen at Prez Cup 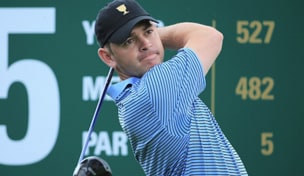 DUBLIN, Ohio – Any worries about the lingering effect of Louis Oosthuizen’s neck injury entering this week’s Presidents Cup have been extinguished.

Last week, playing competitively for the first time since July, Oosthuizen posted scores of 74-69-68 at the Dunhill Links Championship to miss the cut, but assuage any fears about his status for this week.

“Louis is 100 percent,” International captain Nick Price maintained. “He played [three] rounds at the Dunhill last week in cool temperatures. That's always hard when you're coming back from an injury to play in cool temperatures. He missed the cut, but he said he played really well and he didn't have any pain.

“I think the warmth this week will help him a little bit more. I think he's hit balls; he practiced for probably a week and a half before he went to the Dunhill, and he's going to be ready. I think he's playing with Charl [Schwartzel]; I think being out there with Charl today, Charl probably knows his swing as well as Louis knows his own swing, so they will probably help each other and feed a little off each other.”