No pressure in Web.com Tour Finals? No way 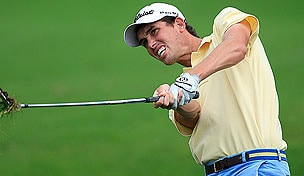 Getty Images
KOHLER, WI - AUGUST 10: (L-R) Rickie Fowler and John Daly look on during a practice round prior to the start of the 92nd PGA Championship on the Straits Course at Whistling Straits on August 10, 2010 in Kohler, Wisconsin. (Photo by Andrew Redington/Getty Images)  -

PONTE VEDRA BEACH, Fla. – This week’s gathering at TPC Sawgrass may not answer to the name Q-School, but late Saturday afternoon it certainly felt like the Fall Classic.

For 16 holes Chesson Hadley had been on cruise control at the Web.com Tour Championship, pulling away from the field with an eagle-2 at the third hole on Dye’s Valley Course to move to 12 under par and three strokes clear at one point.

Following a bogey at the 17th hole, his first misstep of the day, the 26-year-old pushed his 3-wood tee shot at the last hole into an awkward lie right of the fairway and misplayed his approach into a water hazard on his way to a double-bogey-6 and third-round 70 at the decisive finale.

“I’m not very happy right now, but we still have a chance tomorrow so that’s a good thing,” Hadley said. “It was a tough way to finish but we’ll be right there.”

Hadley is tied with Joe Durant at 9 under par, a stroke behind surprise leader Scott Gardiner. Of course, of that group only Durant – who will turn 50 next April – is playing for a PGA Tour card this week. Hadley (third on the regular-season Web.com Tour money list) and Gardiner (11th on the Finals money list) have already locked up their 2013-14 status.

“I was fortunate to play well the first week and give myself another go of it next year,” said Gardiner (65), who finished tied for third at the first Finals event. “The main objective was to get back there.”

Durant still has some work to do to return to the Tour for his 17th full season. The soon-to-be 50-year-old said he’d likely split his season between the two tours next year but first he has to survive Sunday’s final turn.

The top 25 players on the four-event money list after Sunday’s final round will join the top 25 finishers from the regular-season Web.com Tour money list on the PGA Tour next year.

The third round was delayed nearly three hours early Saturday because of heavy overnight rains and players were re-paired and sent off the first and 10th tees.