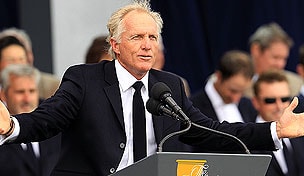 Naples, Fla., will play host to two tournaments in a three-week span, starting next year. The LPGA's CME Titleholders, which is leaving Orlando, will be played Nov. 15-18 at TwinEagles. Three weeks later, the Franklin Templeton Shootout will be played at Tiburon GC.

Shootout host Greg Norman takes some credit for the LPGA's move to town.

“(It’s) probably a reflection of the success of what the Naples area has done for the Shark Shootout,” Norman said Thursday. “I think it’s a compliment to us that they have come.'

While Norman believes there is room for the LPGA, he is concerned about the capacity of the community to support two tournaments so close together on the calendar.

'You’ve got to be careful about not getting too close,' he said. 'Is three weeks too close? We’ll see.”