Not just a pretty face: Gal focused on mental aspect 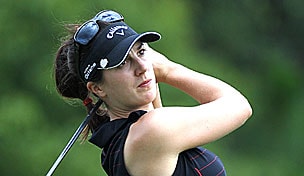 ORLANDO, Fla. – Sandra Gal understands sex appeal is part of her growing popularity as an LPGA professional, but she wants to be known primarily for her accomplished game.

She told GolfChannel.com Tuesday that she doesn’t mind being labeled the “Hottest Golfer” on the planet, as long as it promotes the women’s game. Two weeks ago, Gal won GolfDigest.com’s inaugural “Hottest Golfer” contest in an online voting competition.

“To be honest, I don’t consider myself the most attractive girl out there, but it’s nice to see a lot of people participated in that voting,” Gal said. “Hopefully, it can bring more attention to the women’s game.”

Gal, 26, is known for playing in short skirts. She has experience modeling, for a fashion magazine in her native Germany, and for Callaway. She was into ballet growing up.

“I don’t really work on that image, maybe it’s something that just comes naturally,” Gal said. “I did a bit of work for Callaway and their catalogs, but I’m really focused on my game and to be the best athlete I can be. That’s always going to be my No. 1 focus.”

Gal enjoyed a breakthrough season last year, her fourth as an LPGA pro, winning her first LPGA event, the Kia Classic, and making her first European Solheim Cup team. She is scheduled to make her 2012 debut at the LPGA season-opener next week at the ISPS Handa Women’s Australian Open at Royal Melbourne.

“That’s going to be hard to top,” Gal said. “It was a great year. I’m just going to take the things from last year that need improvement and work on them, and build on my strength, and hopefully we can make it an even better year this year.

“Another big aspect I’ve been working on is my mental game,” Gal said. “I think it’s very strong, but it needs improvement.”