Here is a by-the-numbers look at the 2012 PGA Tour, with a few stats you likely won’t hear on a TV broadcast:

• Most drives over 300 yards in an event: 46, by Chris Couch at the Waste Management Phoenix Open

-- Worth noting: Only two players – Charlie Beljan (Disney) and Rory McIlroy (PGA) – led the field in driving distance en route to a victory

• Lowest percentage of fairways hit by 2012 winner: 41.1 percent, by Johnson Wagner at the Sony Open

-- Worth noting: No player in 2012 led the field in driving accuracy en route to a victory

-- Worth noting: Chad Campbell, No. 106 on the money list, was the only player this season to accomplish the feat twice. At the McGladrey Classic, Campbell hit a season-best 35 greens in a row

-- Worth noting: World No. 4 Lee Westwood, much-maligned for his work around the greens, holed out only once in 2012.

• Most consecutive sand saves: 16, by Jonas Blixt, beginning on the sixth hole during the final round of the Sony Open

-- Worth noting: Perhaps even more impressive, Ben Crane made 13.44 percent of putts outside 20 feet, which helps explain why his per-round average of 86 feet, 11 inches of putts made was best on Tour

• Most feet of putts made in a round: 199 feet, 1 inch, by Troy Kelly at the Justin Timberlake Shriners Hospitals for Children Open (shot 68 that day)

-- Worth noting: The toughest course to putt from inside 5 feet was Riviera (94.8 percent made)

• Course with the most three-putts: Quail Hollow, with 354

-- Worth noting: Tommy Gainey, a winner at the McGladrey Classic, was the worst, at 57 over par

-- Worth noting: Sunghoon Kang, who finished 194th on the money list, was the worst, at 129 over par

-- Worth noting: Kyle Thompson was the worst, at 29 under. He finished 227th on the money list

• Fewest over-par holes in an event: 1, by Duffy Waldorf at the True South Classic

-- Worth noting: He only finished T-21 at that event

• Most consecutive rounds in the 60s: 13, by Chris Kirk and Scott Piercy

• Total number of balls in the water in stroke-play, non-major events: 4,386

-- Worth noting: TPC Southwind, host of the St. Jude Classic, had the most, with 338 water balls 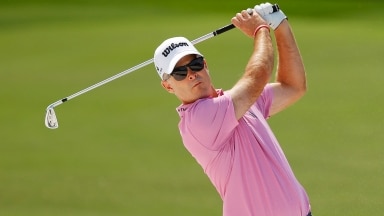