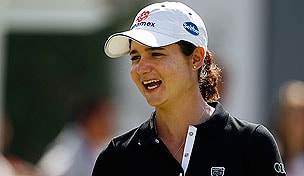 Former Rolex world No. 1 Lorena Ochoa announced Tuesday via Twitter that she has given birth to her second child.

Ochoa, 31, who left the game while holding the top ranking three years ago, gave birth to a daughter. The baby’s name is Julia. Ochoa’s first child, Pedro, will turn 2 next month.

In April of 2010, when Ochoa announced she was stepping away from the game to devote herself to her marriage and her philanthropic efforts, she expressed the desire to start a family.

The translation: “We are happy to share that today at 3:30 p.m. our daughter, Julia, was born. Thanks for the good wishes.”

The Lorena Ochoa Invitational is scheduled next week in Guadalajara, Mexico. It’s unclear if Ochoa will be able to attend. Ochoa won 27 LPGA titles, two majors, qualifying for the tour’s Hall of Fame.