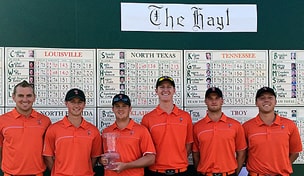 Getty Images
“It was a good release. He’s a strong fellow and he had good speed on that one … It’s an art [club throwing]; it takes years of experience and training.” - on Rory McIlroy's club toss into a lake  -

After two quiet years, the Oklahoma State men’s team is back in the NCAA title conversation.

The Cowboys, No. 2 in Golfstat’s team rankings, won their fourth event in a row Tuesday at the John Hayt Invitational. They shot a final-round 282 to finish 10 shots ahead of runner-up UCF at Sawgrass Country Club.

The winning streak is Oklahoma State’s longest since it reeled off five consecutive victories during the 1994-95 season.

That the Cowboys have returned to their winning ways is one of the main storylines as we inch closer to postseason play.

After annually churning one of the most dominant regular-season teams in the past decade, Oklahoma State had fallen on hard times recently – relatively speaking, of course. In 2012, the Cowboys finished sixth in the Big 12 and failed to advance to the NCAA Championship for the first time in 65 years. A year later, OK State finished 14th at NCAAs.

Apparently that wasn’t enough to save Mike McGraw’s job. The head coach there since 2005, he helped the Cowboys win the NCAA title in 2006 and was one of the best recruiters in the country. He is now an assistant coach at defending NCAA champion Alabama, which has won 11 events in a row.

McGraw’s spot was filled by Alan Bratton, a former OSU All-American and men’s assistant coach who had led the women’s program for the past two years.

Bratton is a fine coach and a worthy replacement, but Oklahoma State has returned to prominence on the strength of a deep and talented lineup that features a U.S. Walker Cupper and another rising star.

Few had heard of Jordan Niebrugge before he went on a summer tear last summer, winning the U.S. Amateur Public Links and Western Amateur to land a spot on the victorious American team. He’s continued that fine form during his second season in Stillwater, earning his first college title earlier this month in Hawaii.

Niebrugge was one of four Oklahoma State players who finished inside the top 10 at the Hayt, along with freshman Zach Olsen, senior Talor Gooch and redshirt freshman Wyndham Clark.

Clark has been the most impressive Cowboy this season – his T-6 at the Hayt was his fifth consecutive top-6 finish. He is No. 8 in Golfstat’s individual rankings.

Oklahoma State’s next start, the March 6-9 Southern Highlands Collegiate, should shed more light on this team’s title potential. The Southern Highlands is the No. 1-ranked event nearly every year, and 17 of the 30 players on the recent Hogan Award watch list are scheduled to appear.