Olazabal: Kaymer is 'determined to give his best' 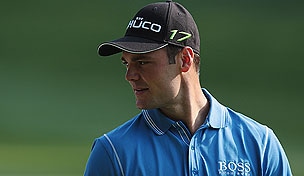 Captain Jose Maria Olazabal remains confident that Martin Kaymer will be ready for next month’s Ryder Cup at Medinah – even if some already have speculated that the 2010 PGA champion could forfeit his spot on the European team due to poor play.

Kaymer, the former No. 1 player in the world, has not recorded a top-10 finish since April, skidding to No. 27 in the world and barely holding on to the 10th and final qualifying spot on the World Points list. Nicolas Colsaerts, who on Monday was chosen as one of two captain’s picks for the European team, had a chance to earn an automatic spot and knock Kaymer out of the top 10 with a high finish last week at Gleneagles, but eventually finished T-19.

In a statement Sunday, Kaymer said, “I am obviously very happy to be on the team. A little relieved, yes, but overall it is just a great feeling. … I really feel inspired to get my game ready and to work as hard as I have to to be ready.”

Kaymer added that he’s been working on his game with his coach, Gunther Kessler, and plans to play the KLM Open and BMW Italian Open before heading to Medinah.

According to a report Sunday in The Sun newspaper in London, however, Kaymer has privately considered turning down a spot if his game doesn’t improve.

The Sun quoted one anonymous player who said, “The word on the range is that Martin is seriously considering whether he will be able to do himself justice. There was a feeling he would not have minded being overtaken by Nicolas, because at least it would have taken the decision out of his hands.”

Only Sandy Lyle, in 1989, has turned down a spot on the Ryder Cup team because of poor performance.

When asked about Kaymer during Monday’s news conference to announce his two captain’s picks, Olazabal remained steadfast in his support for the German.

“I talked to Martin yesterday, had a little chat on the phone, and he’s been working really hard the past two weeks after the PGA and is really happy with the results that he’s seeing,” Olazabal said. “Don’t get it wrong – he wants to be a part of that team and is determined to give it his best. He made that point very clear to me yesterday, and I don’t think I’ll have any issues with Martin.”