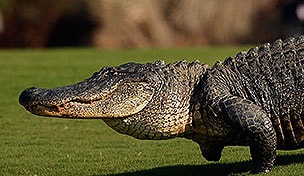 As construction continues on the course that will host golf's return to the Olympics in three years, an unexpected element has been added to the mix: caimans.

According to a Bloomberg report, as many as 6,000 of the reptile species, which is a smaller, more docile member of the alligator family, live in lagoons around Rio de Janeiro. As their habitats have become increasingly polluted, many have begun to migrate to the ponds and water hazards that will soon line Gil Hanse's design.

Officials in Brazil, however, are downplaying the potential impact that the caimans could cause to golfers and fans alike during the 2016 Rio Olympics.

'We'll have a strategy in place that will minimize any possibility of a player or spectator coming across these,' explained Anthony Scanlon, executive director of the International Golf Federation, adding that the creatures posed a 'minimal' risk. 'The other thing to remember about these alligators is, if they do arrive, they arrive at night and we won't be playing golf at night.'

The report indicates that a more significant threat for officials could be posed by capybaras, the largest rodents the world who happen to call Brazil home.

'They're herbivores so they could potentially dig up the grass,' said Scanlon, adding that animals of various shapes and sizes often find refuge on golf courses around the world. 'Where you have a natural green space like this, it attracts wildlife, which is what you want.'