Oosthuizen's back flares up during quarterfinal loss 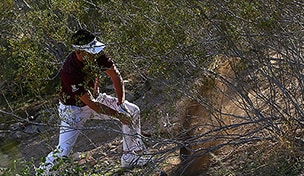 MARANA, Ariz. – Not that Louis Oosthuizen had any interest in excuses, but before the South African teed off for his quarterfinal match against Jason Day on Saturday at the WGC-Accenture Match Play Championship he was haunted by the distinct possibility that he may not be able to finish the match.

Oosthuizen has been slowed by an ailing back since before last year’s Presidents Cup and felt it early on Saturday. He pushed his drive at the second hole into the desert right of the fairway when his back “locked up.” He received treatment throughout the day.

His back improved as the day progressed, but Oosthuizen lost his match, 2 and 1, and remained unsure if he would play next week’s Honda Classic as he had originally planned.

“If I take two or three days off, everything feels brand new,” he said. “But it’s irritating that it’s coming back all the time.”

Oosthuizen said the condition has improved since he began strengthening his back, and a shot to help alleviate the pain about three months ago helped, but he was disappointed it flared up at such a crucial moment.

“It was a bit of a disappointment to start on the range not feeling good,” he said. “I need to address it big time.”