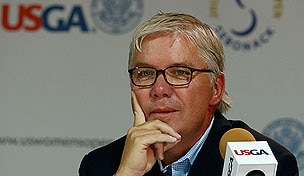 Getty Images
LA JOLLA, CA - FEBRUARY 15: John Daly with his wife Sherrie and son John Jr. during the final round of the Buick Invitational at Torrey Pines Golf Course on February 15, 2004 in La Jolla, California. (Photo by Scott Halleran/Getty Images)  -

Thomas J. O’Toole Jr. of St. Louis has been nominated to serve a one-year term as president of the USGA.

The election of officers and the 15-member USGA Executive Committee will take place Feb. 8, 2014, at the USGA’s annual meeting at Pinehurst Resort & Country Club in the Village of Pinehurst, N.C.

“I am truly honored and deeply humbled to have been nominated as the next president of the USGA,” said O’Toole, 56. “It has been my privilege to serve the organization for 25 years as a Rules official at the U.S. Open and other USGA championships. During that time, I have come to have deep admiration for the Association and its important work. I look forward to working closely with my colleagues on the Executive Committee and with the talented staff of the organization, led by executive director Mike Davis. Together, we will continue to advance our mission and work with our valued partners across the golf industry to foster the long-term sustainability of this great game.”

O’Toole is in his sixth year as a member of the USGA Executive Committee and second as vice president. Currently, he chairs the Championship and Compensation Committees and also serves on the Audit, Commercial, Handicap, International Team Selection, Management, Rules of Golf and Joint Rules of Golf Committees.

O’Toole has been associated with the USGA since 1988, and has served as a Rules official at more than 125 USGA championships, including every U.S. Open since 1990. He also has been the lead official in conducting more than 125 qualifying rounds for USGA championships. O’Toole has been certified as a Rules of Golf expert each year since 1990, and he has been a consulting member of the Rules of Golf Committee since 2004.

In 1992, he helped to found the Metropolitan Amateur Golf Association, a regional association that serves eastern Missouri and central Illinois. He serves on the executive board of the Association.

Four other current members of the Executive Committee have also been nominated to serve as officers: Daniel B. Burton of Lititz, Pa., and Diana M. Murphy of St. Simons Island, Ga., as vice presidents; William L. Katz of Chatham Township, N.J., as secretary; and Mark E. Newell of McLean, Va., as treasurer.

In addition, Ernest J. Getto of Santa Barbara, Calif., has been nominated to serve a second term as general counsel for the USGA.

There are three newly nominated candidates for the Executive Committee for 2014: G. Thomas Hough of Atlanta, Ga.; Asuka Nakahara of Merion, Pa.; and George J. Still Jr. of Atherton, Calif.