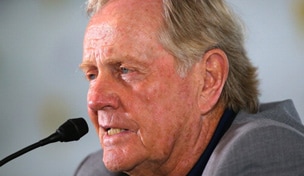 DUBLIN, Ohio – One of the main differences between the Presidents Cup and next year’s Ryder Cup is the captains’ ability to match each other’s pairings in order to gain favorable match ups.

At the Ryder Cup, both captains set their lineup, for either team play or Sunday’s singles matches, without knowing who they will play. For Jack Nicklaus, a four-time Presidents Cup captain, it’s what makes the biennial event so compelling.

“I love the Presidents Cup way of pairing,” said Nicklaus, the host of this week’s matches at Muirfield Village.

At the 1998 Presidents Cup at Royal Melbourne, for example, Nicklaus remembered hearing that Greg Norman didn’t want to play Tiger Woods in Sunday singles because the Australian was injured.

“Word got to me that he didn't want to play, so Tiger said to me, ‘I want Norman,’” Nicklaus said. “We (Nicklaus and International captain Peter Thomson) kept going back and forth on the pairings and we have four left and (Thomson) had the first pick; he was had.”

As Nicklaus left the room after the pairings, Norman asked, “Why did you do that to me?”

“I said, ‘Hey, you're not on my team,’” Nicklaus laughed. “Norman didn't like it to start with but he laughed about it later. That's just part of the fun.”

Woods beat the Shark, 1 up.