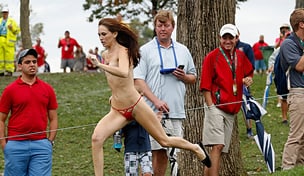 There were precious few moments of drama at the Presidents Cup, which helps explain why there was so much attention paid to the patriotic streaker who bolted past U.S. captain Fred Couples on the 18th hole Sunday (click for photos).

Apparently, she was “streaking for Stricker,” as in the 46-year-old, happily married and semi-retired Steve Stricker, which marks the first such episode in his PGA Tour career. Couples, as you can see in the above photo, got a good look at the streaker, who was dressed in a red thong, red, white and blue pasties, and black flats for traction. Fortunately for her, the U.S. went on to win, 18 ½ to 15 ½.

Despite displaying impressive agility in soggy conditions, she was eventually tracked down by police, according to this report, and given a citation for disorderly conduct, a misdemeanor.