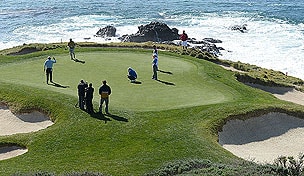 Getty Images
Rory McIlroy of Northern Ireland plays his shot from the fourth tee during round three of THE PLAYERS Championship at the TPC Sawgrass Stadium course on May 9, 2015 in Ponte Vedra Beach, Florida. (Photo by Richard Heathcote/Getty Images)  -

Because of the three-course rotation for the AT&T Pebble Beach National Pro-Am, when play is halted on one course because of unplayable conditions the other two courses are closed as well.

So it went on Thursday when a morning storm dumped nearly an inch of rain on competitors, but the course at Monterey Peninsula Country Club, because of its sand base, was draining well enough that play could have continued. The greens at Pebble Beach, however, were swamped by the rain and play was halted for 2 hours and 40 minutes.

Appleby estimated that Monterey Peninsula, which is also where Round 1 clubhouse leader Andrew Loupe played, would have played three strokes harder if officials hadn’t suspended the round.

“It would have been very difficult. Fortunately for us we teed off on the back nine and we were downwind,” said Jason Day, who played one hole at MPCC before the weather warning horn sounded. 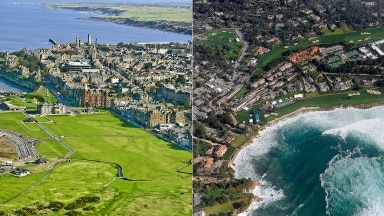 The European Tour is playing the Old Course. The PGA Tour Champions is playing Pebble Beach Golf Links. Which one are you playing if you could only play one? 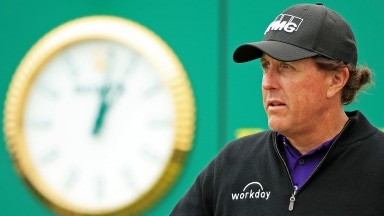 Phil Mickelson will be 57 years old when the U.S. Open returns to Pebble Beach in 2027, which made Sunday’s final round bittersweet. 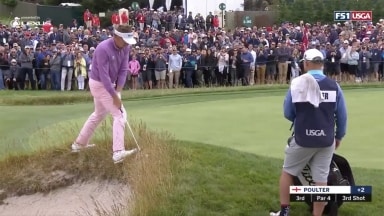 The par-4 third hole at Pebble Beach is playing as one of the easiest holes this week at the U.S. Open, but Friday, Ian Poulter made it look like the most challenging.