Pebble last chance for Match Play, but seeds could change 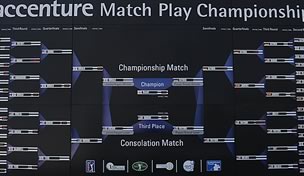 This week’s AT&T Pebble Beach National Pro-Am is the last chance the world’s best players have to qualify for the year’s first World Golf Championship later this month in Arizona, but a slight administrative adjustment means it won’t be the last opportunity to change how the field is seeded for golf’s version of March Madness.

The top 64 available players in the world golf rankings on Feb. 13 will qualify for the WGC-Accenture Match Play Championship but a format change announced by the PGA Tour on Tuesday will delay the seeding of the four brackets until the ranking is released on Feb. 20.

The move, which would only change how the field is seeded and not who qualifies for Dove Mountain, was a reaction to the current volatility of the world golf rankings and gives organizers the best chance to get a coveted 1 vs. 2 matchup. It would also give players a chance to improve their seeding with a solid week at the Northern Trust Open or Avantha Masters on the European Tour.

Phil Mickelson (ranked 17th) announced he will skip the Match Play for the second time in three years to participate in a family vacation, and Paul Casey (No. 24) is still recovering from a snowboarding injury in January and unsure whether he will play the WGC.

“He continues to progress well but doesn't want to be held to a deadline and will leave it until the last minute to make a final decision,” Casey’s manager Guy Kinnings told GTC.

That makes Charles Howell III this week’s bubble boy at No. 66 in the ranking and he is not in the field at Pebble Beach.

Among the players who could make a move this week are Rory Sabbatini, No. 68 in the ranking and a former runner-up at Pebble Beach (2006), and Joost Luiten, who dropped from 64th to 67th last week but could make up ground with a solid showing at the points-rich Dubai Desert Classic.