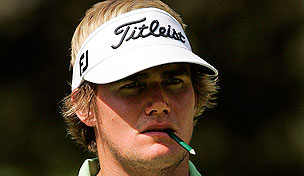 PONTE VEDRA BEACH, Fla. – John Peterson says fellow LSU alum David Toms has given him all the encouragement he needs to play the PGA Tour.

Peterson, whose 4-under-par 66 Thursday moves him into early position to win the Web.com Tour Championship and also win the overall Web.com Tour Finals, has played the entire four-tournament series with Gneiser on his bag. They came to an agreement to officially make themselves a team a little more than a week ago.

“David understands,” Peterson said. “David has been so good to me over the last seven or eight years. He’s helped me with everything I’ve done, starting my career, getting LSU football tickets. Really, any advice I need, I talk to David. Now, he gave me his caddie. He can’t be any more of a better guy.”

Peterson, who won the NCAA Championship as an individual in 2011 and tied for fourth at the U.S. Open last year, played most of this Web.com Tour season with a friend on his bag. Peterson had two top 10s in the regular season. With Gneiser on his bag, Peterson has logged these finishes in the first three events of the Web.com Tour Finals: T-5, T-3, 3rd.

“I won’t be out-caddied,” Peterson said. “In my opinion, he’s the best caddie out here.”