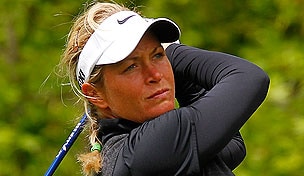 Suzann Pettersen will be looking to win the LPGA KEB-HanaBank Championship for the third time in her career when she tees it up Friday at Sky 72 Golf Club’s Ocean Course in Incheon, South Korea.

This is the 12th time this championship will be played, and Pettersen remains the only non-Asian to win it. She’s the defending champion. A year ago, she followed her victory in Incheon by winning the next week in Taiwan. She has won four of her 13 LPGA titles in Asia and also won a Ladies European Tour event in China. She won the LPGA KEB-HanaBank Championship for the first time in ’07.

“When I won here last year, it kind of kick started a fantastic year, so I’m glad to be back as defending champion,” Pettersen said in a pre-tournament news conference. “Korea has been really good to me in the past, so I’m excited to be here again.”

Pettersen arrives in South Korea with a hot hand. She tied for third at the Sime Darby LPGA Classic last week and won her two starts before that. She hasn’t finished worse than T-7 in her last six starts.

Rolex world No. 2 Pettersen will be paired with No. 1 Inbee Park in the first round. They were paired together in the first two rounds last week in Malaysia.