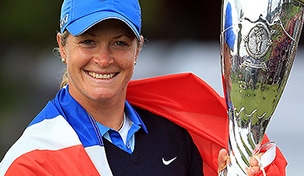 Suzann Pettersen will be looking to win her third consecutive LPGA start when she tees it up Thursday at the Sime Darby LPGA Malaysia.

Pettersen is back in action for the first time since winning the Evian Championship in France a month ago. Pettersen also won her start before Evian, taking the Safeway Classic.

Inbee Park won three straight LPGA titles earlier this year, claiming the Wegmans LPGA Championship, the Walmart NW Arkansas Championship and the U.S. Women’s Open in consecutive starts. At No. 2 in the Rolex world rankings, Pettersen won’t have to look far to keep tabs on No. 1 Park, who is the event’s defending champion. Pettersen and Park are paired together over the first two rounds along with Karrie Webb. No. 3 Stacy Lewis also is in the field at Kuala Lumpur Golf & Country Club.

Though this is the part of the world that South Korea's Park calls home, Asia has been awfully good to Pettersen over the years. She has won four of her 13 LPGA titles in Asia. She also won a Ladies European Tour event there.

“I love coming here,” Pettersen said Wednesday in her pre-tournament news conference. “I've really tried to embrace it.  I've really tried to enjoy it and look at it as it's just another opportunity.  I think I've had almost half my wins in Asia, so it's kind of been a good place for me and I can bring back good memories.

“I don’t know if it’s the food, the water or what, but something seems to appeal to me.”

Though Park has built giant leads in the Rolex Player of the Year and money title races, Pettersen and Lewis still have chances to overtake her in the six remaining LPGA events. It will take a monumental effort, though. Pettersen and Lewis need at least two more victories to have any chance at Player of the Year, probably three more, depending on what Park does. Park leads the Rolex POY race with 290 points, Pettersen is second with 204 and Lewis is third with 195. The top 10 finishers in an event earn points with 30 going to the winner, 12 to second place, nine to third place and all the way down to one point for 10th place.

The race for the Vare Trophy, the year’s low scoring average, is about the only significant statistic Park isn’t leading, but she’s still in the hunt for that. Lewis leads the tour in scoring with a 69.56 average. Pettersen is next at 69.70 with Park third at 69.79.