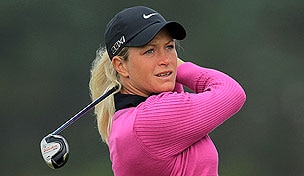 Suzann Pettersen tees it up at the Safeway Classic this week playing some inspired golf.

Though the No. 3 player in the world has some work to do catching No. 1 Yani Tseng, who is pulling away in a brilliant run setting her up as the game’s most dominant player, Pettersen is playing with some strong momentum and motivation.

After visiting her Norwegian homeland last month to honor the memory of the victims of the two terrorist attacks there this summer, Pettersen headed to the Ladies Irish Open, where she posted weekend rounds of 63 and 64 to win in a six-shot runaway. Pettersen’s been deeply moved by her country’s suffering.

“It was very nice to go home after the British to kind of get a feel and take part in all the ceremonies and all the memories of all of the people that got affected by this terror,' Pettersen said. “The incredible thing is just how everyone's kind of worked around this together. Everyone's just been supporting each other.”

Pettersen made her nation proud at Killeen Castle, home to next month’s Solheim Cup. She beat a field that included Americans Stacy Lewis, Christina Kim, Vicky Hurst and Alexis Thompson. Lewis, the Kraft Nabisco winner, has clinched a spot on the American Solheim Cup team, Kim’s close to clinching and Hurst is on the bubble.

With the Americans seeking to win the Solheim Cup for a fourth consecutive time, the Europeans need Pettersen, their best player, to set the tone. Though Killeen Castle is a parkland course, a venue Americans should be more comfortable on than a links, Pettersen likes how it sets up for Europe.