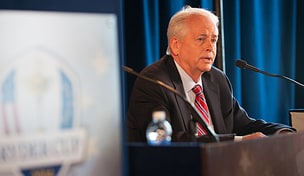 PGA president Ted Bishop was inducted into the Indiana Golf Hall of Fame on Tuesday night at Meridian Hills Country Club in Indianapolis.

A native of Logansport, Ind., Bishop, 59, graduated from Purdue and began his career as a professional and superintendent at the Phil Harris Golf Course in Linton He was elected to PGA membership in 1985 and has served in a leadership capacity at either the section or national levels since 1989. From 1997-98, he served as president of the Indiana PGA section, and was the 1998 Indiana PGA Golf Professional of the Year.

Bishop is the PGA general manager at The Legends Golf Club in Franklin, Ind. He has served since 2006 on the PGA Board of Directors.

Joining Bishop in the Hall on Tuesday was former PGA Tour pro Chris Smith, who was the 1991 Big Ten Conference champion while completing an All-American career at Ohio State. He went on to win the 2002 Buick Classic but has not played on Tour since 2005.